Joachim Köhler, Managing Director of #openspace, Commerzbank's digitalization platform for German SMEs, is convinced: "In the digitalization of business models, the technology factor is greatly overestimated and the human factor colossally underestimated. In mid-February, Köhler passionately represented this position at a panel discussion in Berlin as part of the Digital Relaunch Congress of the software developer Infopark Group on the topic of "Digitalization in the German SME sector". Over two days, experts gave a broad status update on the state of "digitalization in the German SME sector" and looked to the future in 18 podiums and lectures as well as four full-day workshops. 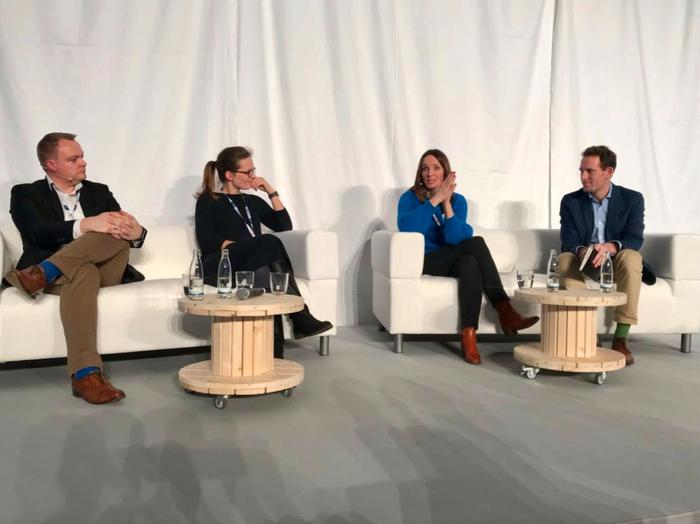 In the panel discussion "Digitalization concrete" moderated by Dominik Grau, Tagesspiegel, the "human factor" also quickly moved into focus. Anna Kaiser, founder of the start-up Tandemploy, made it clear: "’New Work’ as a generic term for new working methods is not a buzzword, but mission critical. Nowadays, unfortunately, people often still work in silos, experience and knowledge are not shared.” When transforming companies, however, absolute esteem for the individual is important.” I want to consciously give a person who has been on the assembly line for 30 years the chance to help develop the systems for the digital business model," says Kaiser. Susanne Nitzsche, Head of Innovation Lab of the recyclables company ALBA and alumni of #openspace, had the same opinion: "We have to reach the people in the company, not the technology. Communication is the key.” And the hurdles are manifold, for example ALBA: "Not all our professional drivers have a company smartphone". In addition, there are flexible working time models to get the best brains: "You can't find good full-time IT specialists. Everyone wants to have their projects done on the side," says Anna Kaiser from Tandemploy. Companies have to make it a big deal: "Only if we think utopian can we manage to take small steps in the right direction.” A few years ago, job sharing was not a relevant topic, and soon the 90,000-employee company SAP is going to go live with a job sharing model for all management positions," continued Kaiser.

Discover digital potential in the company

"The best answer to the shortage of skilled workers is to empower your people yourself and put them in the locomotive of the digitalization train. But first you have to give them the right tools and methods," concluded Joachim Köhler. Hardly anyone knows the respective company with its opportunities and risks better than their own staff. #openspace, on the other hand, provides workshops and intensive seminars that teach exactly the skills that help mid-sized companies build their own digitalization experts.” The technology required for the respective business model is then only part of the result. But first come people. You want to digitize? Then empower your people," says Köhler's urgent message.

Digital Relaunch is the Berlin congress event of Infopark AG for digital transformation of companies with numerous inputs on the implementation of digital strategies, agile working methods and new work concepts, digital business and marketing. #openspace accompanied the congress on 11 and 12 February 2019 as the exclusive business partner. On the second conference day, Rocky Wüst, Chief Digital Offcer, and Fabian Feldhaus, Director Marketing & Startup-Scouting, both #openspace, conducted the seminar "Inspiration Day Digital Transformation". About 45 participants from different industries took part in the three-day "Executive Workshops" of #openspace in compressed form. The attendees were given the opportunity to professionally compare their previous understanding of digitalization, current trends and technologies as well as modern methods.

#openspace is the digitalization partner for German SMEs. In addition to the customers of the parent company Commerzbank, #openspace also supports other medium-sized companies in mastering the challenges of the digital world as well as recognizing the opportunities and turning them into successes. #openspace offers its customers various and tailor-made solutions for every phase of the digital transformation. The focus is on the multilayered workshop formats conceived by #openspace. The contents are not conveyed to the participants theoretically, but are applied practically and directly to the individual problem through modern working methods. In order to ensure the practical benefit and added value of the solutions, important parts of the customer value chain and strategic partners of #openspace are individually involved with specialist knowledge. The aim is to enable managers and employees of medium-sized companies to develop their digital future independently. #openspace also offers access to an extensive network of digitalization and technology experts and start-ups. openspace GmbH, founded in 2017, is based in Berlin and maintains regional networks and customer relationships with relationship managers in Cologne, Hamburg, Frankfurt and Stuttgart.